The Falcon and the Winter Soldier episode 3 — out April 2 on Disney+ and Disney+ Hotstar — finds all our characters in murkier waters, or descending (further) into them. Bucky Barnes (Sebastian Stan) helps orchestrate a prison riot that allows Baron Zemo (Daniel Brühl) to escape. We are briefly reunited with former SHIELD agent Sharon Carter (Emily VanCamp) who has stuck her fingers in black market pies after having been branded a traitor by her government. New Captain America, John Walker (Wyatt Russell), is going off-the-books to track down Sam Wilson (Anthony Mackie). And The Falcon and the Winter Soldier’s current antagonist, Flag Smashers leader Karli Morgenthau (Erin Kellyman), confirms her villain status by blowing up innocent civilians.

It’s clear that some reckoning is due for everyone on The Falcon and the Winter Soldier. Zemo might be the first one to be at the receiving end of that, given how The Falcon and the Winter Soldier episode 3 ends with a surprise reveal: Ayo (Florence Kasumba), second-in-command of elite guards Dora Milaje from Black Panther. Might we glean something about what’s going on in Wakanda from her? Could this somehow tie into Black Panther 2 or that Wakanda series? It’s too soon to tell.

The Falcon and the Winter Soldier episode 3 — titled “Power Broker”, directed by Kari Skogland, and written by Derek Kolstad — opens with an advertisement for the Global Repatriation Council (GRC), the body formed to help put the world back together after the Blip. The GRC was introduced on last week’s The Falcon and the Winter Soldier episode 2, where Sam and Bucky briefly discussed it with the new Cap and his right-hand man Lemar Hoskins (Clé Bennett). Speaking of the new American duo, they are in Munich, where they are trying to get a lead on Karli’s whereabouts. But the people who helped her are opposed to everything Cap stands for — and John is spat upon. Outside, Lemar points out that Karli has been giving these people shelter and medicine, which builds loyalty.

Up north in the German capital of Berlin, Sam and Bucky have arrived to see Zemo. Bucky says that he ought to see Zemo alone, given that Zemo hates Avengers (Sam is one), and their mutual ties to HYDRA. Sam is hesitant but then gives in. This is an interesting scene because it’s the first time that Bucky is seeing Zemo since after his mind was freed. In a way, Bucky is facing his dark brainwashed past, and Zemo even tries to see how he reacts to the old words. Bucky wants Zemo to find out who has recreated the Super Soldier Serum, which tells Zemo that he must be desperate if he’s coming to a guy locked in a German cell. As he relates their conversation to Sam later, Bucky notes that they need to break Zemo out of jail if he’s going to help them.

That already sounds like a bad idea — Sam reminds Bucky, and in turn the audience, about what Zemo did (he blew up the UN and killed King T’Chaka, in Civil War), but The Falcon and the Winter Soldier episode 3 soon reveals that Zemo has already broken out with Bucky’s help, all while Bucky has been explaining how a “hypothetical” jailbreak might go. Sam is naturally aggravated, but Bucky stops him. He reminds him that Sam broke the law and the Sokovia Accords for Steve Rogers (Chris Evans), the former Cap. And he’s now asking Sam to stick his neck out for him.

The Falcon and the Winter Soldier Episode 2 Recap: A New Captain America, and Flag Smashers 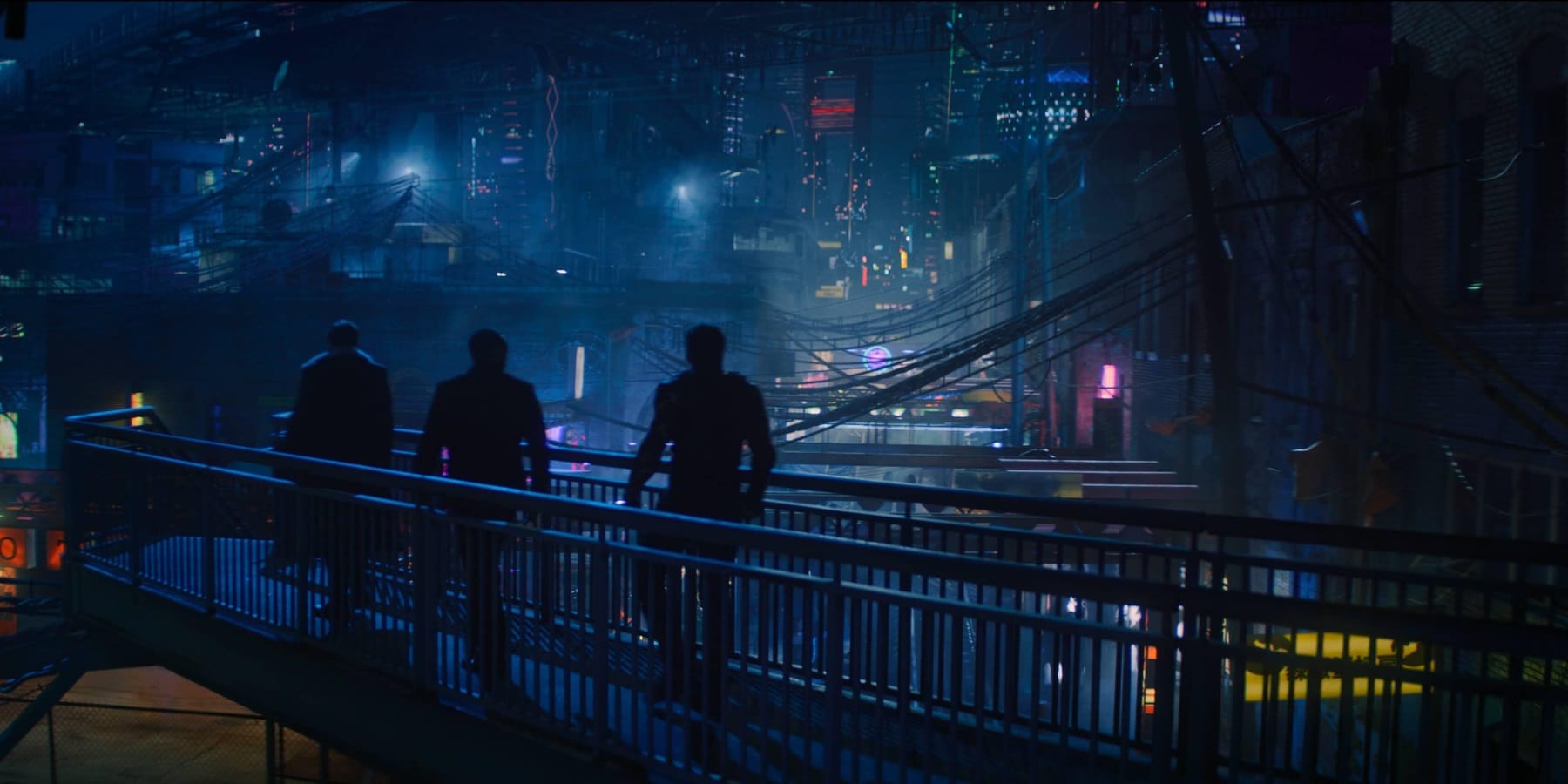 Madripoor in The Falcon and the Winter Soldier episode 3
Photo Credit: Disney/Marvel Studios

As the trio arrive on the tarmac the next day, Zemo reveals that he was Sokovian royalty — he’s a Baron, fulfilling the role he had in the Marvel comics — before his country got destroyed. That’s why he’s rich enough to have a private plane waiting for him. On the plane, Zemo finds Bucky’s notebook that he’s been using for his therapy, which has a list of names to whom he must make amends for his HYDRA days. Sam notes it’s the same notebook that Steve once had, and wonders if Bucky heard the song that Sam suggested to Steve. The conversation then turns into a Marvin Gaye tangent, as both Sam and Zemo talk about how important his songs are, while Bucky — who prefers ‘40s music — remains unconvinced.

They soon arrive in Madripoor, a fictional island nation in the Indonesian archipelago. It was modelled on Singapore in the comics, though on The Falcon and the Winter Soldier episode 3, it feels Madripoor has elements of Macau, Hong Kong, and Shanghai to it as well. But Madripoor doesn’t resemble any of those modern cities in the way it is split — it has a largely-lawless Lowtown half and a Hightown district for the elite and wealthy. Zemo tells Bucky that he will have to pretend to be the Winter Soldier again, and he’s installed Sam in the identity of someone called the “Smiling Tiger”. Sam is not happy about the clothes or the name, but he has little choice.

The Falcon and the Winter Soldier episode 3 has a brief cutaway to Karli in Riga, Latvia, who seems to be with her family as someone — her mother, perhaps? — is on their deathbed.

Back to Madripoor where the trio play along with their identities — Zemo namechecks the Power Broker, first mentioned on The Falcon and the Winter Soldier episode 2 — until they secure a meeting with Selby, the woman who will help them locate the Super Soldier Serum. Hollywood loves villains that have a British accent and Selby (Imelda Corcoran) is cast in that mold as well. Zemo offers the “Winter Soldier” and his codewords in exchange for info on the serum. Selby mentions a Dr. Wilfred Nagel, but before they can end their chat, Sam gets a call from his sister Sarah. Why does Sam have international roaming on? Also, why does stupid Sam have his phone on during a covert mission? Sam tries his best but their cover is blown, though events take a turn for the worse after Selby is killed by an unseen assailant.

The Falcon and the Winter Soldier Episode 1 Recap: Captain America Is Forever 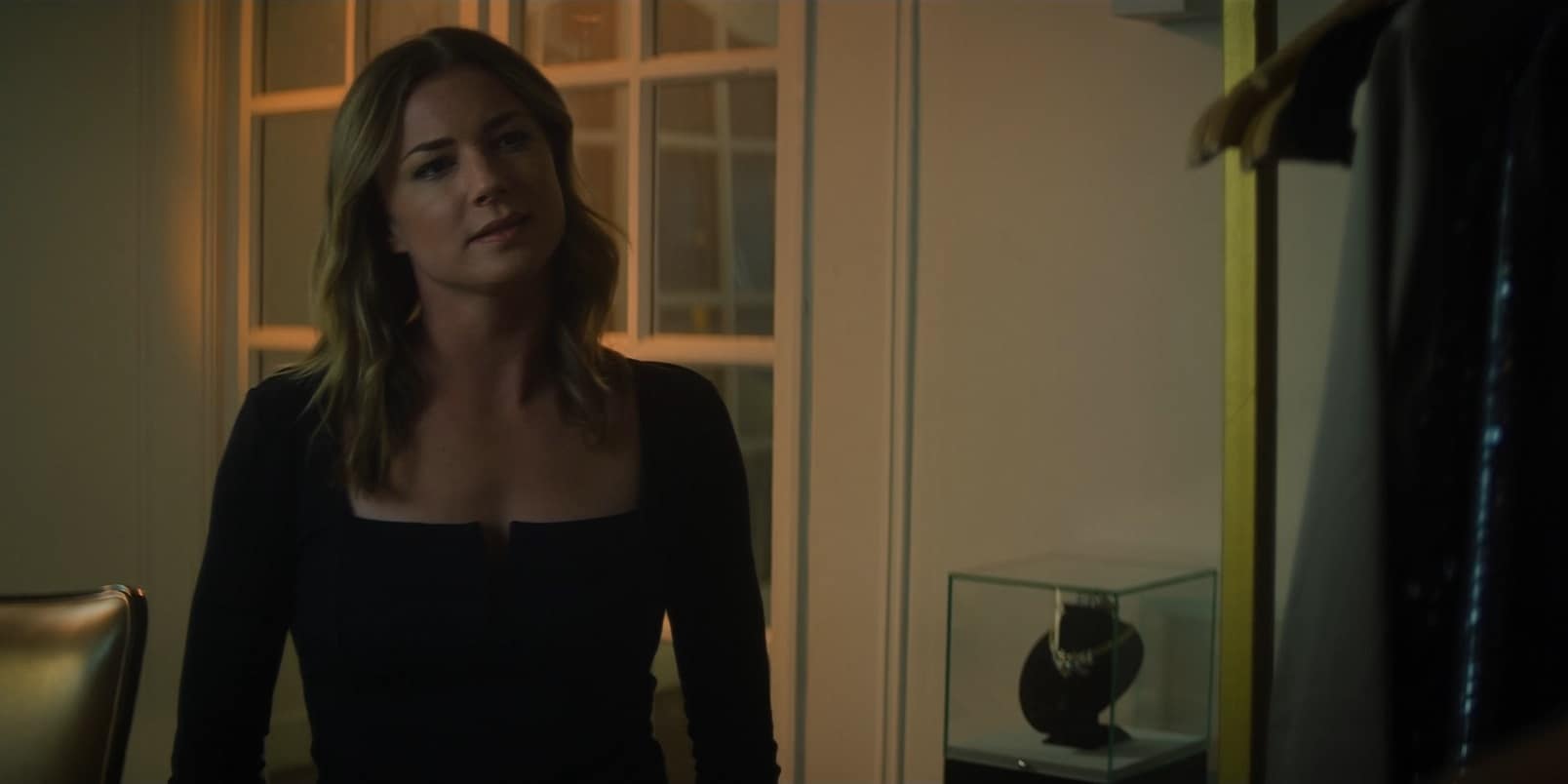 Sam, Bucky, and Zemo make a run for it through Madripoor’s Lowtown, while bounty hunters — who have just been informed of Selby’s death — begin shooting at them. Fortunately, they have a guardian angel who takes out all of them. Enter Sharon. She whisks them away to her apartment in Hightown, where The Falcon and the Winter Soldier episode 3 reveals that Sharon has fully embraced the hustle life. She is selling stolen authentic art; Sam doesn’t believe it until Google confirms it for him. That leads into a nice banter scene between the four — Sam, Bucky, Zemo, and Sharon — as they discuss why Sharon has given up on returning to the US. Eventually, Sam and Sharon strike a deal. He will get her a pardon if she helps locate Dr. Nagel.

Nagel (Olli Haaskivi) is found operating from a tiny hidden lab on the docks. While Sam, Bucky and Zemo ask him questions, Sharon keeps watch outside. She has to deal with a bunch of bounty hunters, which makes for some good action interludes during the interrogation. Nagel reveals that after HYDRA failed, he was recruited by the CIA to isolate the Super Soldier Serum from an American’s blood — this is likely Isaiah Bradley, who revealed in The Falcon and the Winter Soldier episode 2 that he was tested upon by the US government. But Nagel was turned to dust due to Thanos’ Snap and the project was abandoned after the Blip. The Power Broker — another reference — soon funded Nagel’s work. He made 20 vials of the Super Soldier Serum, all of which were stolen by Karli, explaining why the Power Broker has been after Karli and Co.

Nagel reveals that Karli wanted his help to save a woman called Donya Madani who had tuberculosis. Before they can go any further, Sharon bursts in and says that they are being overpowered. Zemo, who had found a gun in the lab, kills Nagel before he can say much more. But before Sam and Bucky can figure out why Zemo just did that, a bounty hunter fires a rocket launcher at the lab and blows them up. The lab is an extreme fire hazard, forcing them to run for their lives. Zemo uses the distraction to slip away, but he’s only trying to flank the enemies. It looked like Zemo was going to escape, but that didn’t happen — yet.

The Falcon and the Winter Soldier episode 3 then takes us to Vilnius, Lithuania where Karli is looking to break into a GRC facility. She all but confirms that Madani (Veronica Falcon) was her mother by calling her “Mama Donya” and she reminisces about the old days with another Flag Smasher and how they ended up in Madripoor. Karli knows that Nagel has been killed, and because they have the last of the Super Soldier Serum, she believes the Power Broker, who’s been hunting them down, will now come begging.

The Falcon and the Winter Soldier: Buddy Comedy, David Lean, and Maybe Season 2? 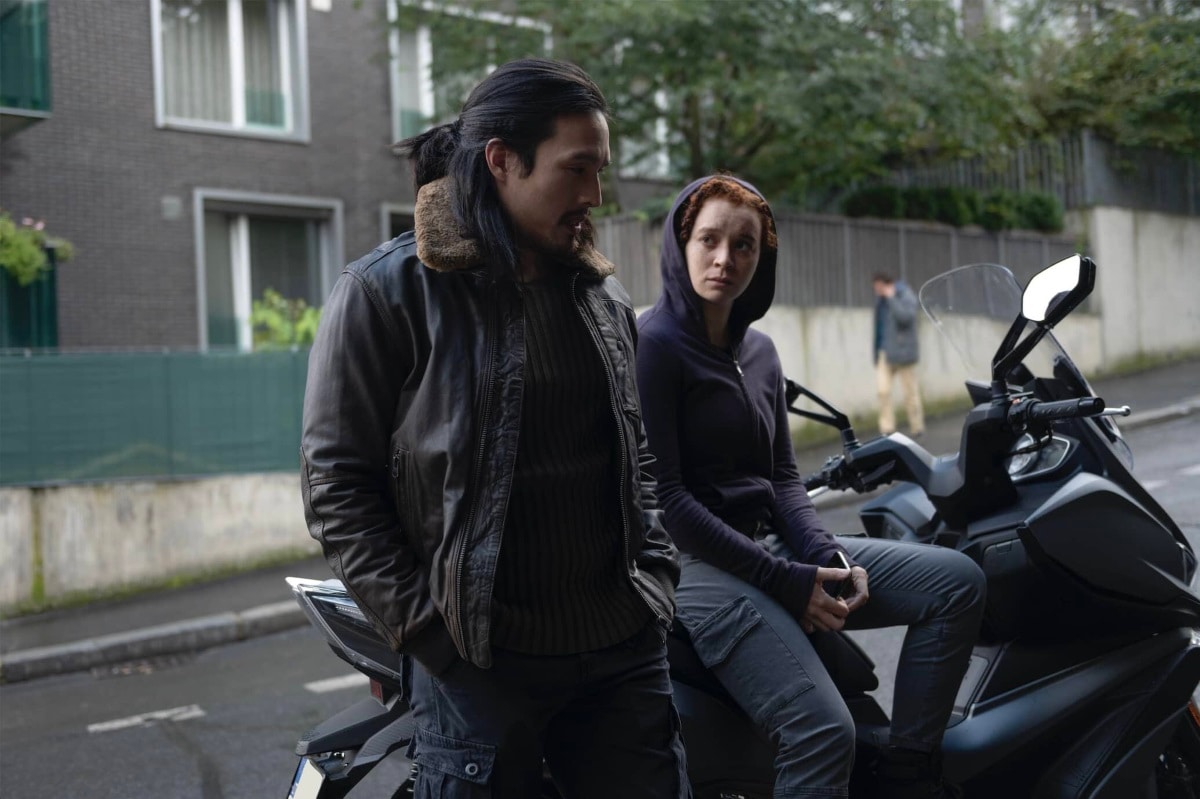 Cut briefly to John and Lemar, who have arrived at the Berlin prison where they learn that Zemo has escaped. John is sure that it was Sam and Bucky since they paid him a visit just prior — I’d also draw the same conclusion honestly — but Lemar says they shouldn’t blame them without evidence. Seeing how Sam and Bucky are willing to bend the law, the new Cap says they need to go off the books as well. “If we get results, our bosses are not going to ask how we did it,” he concludes.

The Falcon and the Winter Soldier episode 3 flips back to the Flag Smashers as they steal six months worth of supplies from the GRC. And to ensure that viewers don’t start rooting for the “Robin Hood character who gives supplies and medicine to those struggling”, The Falcon and the Winter Soldier writers push Karli into villain territory. She blows up what remains of the GRC facility to send a message, which ends up killing all the innocent civilians inside.

Sam, Bucky, and Zemo have traced Donya Madani — or rather, her body — to Riga, which puts them two steps behind Karli. Bucky goes out for a walk, separate from Sam and Zemo. Once they are out of sight, Bucky bends down to pick up a tiny metal ball and starts finding more of them, which eventually leads him to Wakanda’s Ayo. “I wondered when you were going to show up,” Bucky says to her as he turns around. Ayo simply responds: “I’m here for Zemo.” For Ayo and all of Wakanda, Zemo is the guy who killed their former king — and they are not going to let that go.

The Falcon and the Winter Soldier episode 3 is now streaming on Disney+ and Disney+ Hotstar. New episodes release every Friday around 12:30pm IST/ 12am PT.

Orbital, the Gadgets 360 podcast, has a double bill this week: the OnePlus 9 series, and Justice League Snyder Cut (starting at 25:32). Orbital is available on Apple Podcasts, Google Podcasts, Spotify, and wherever you get your podcasts.