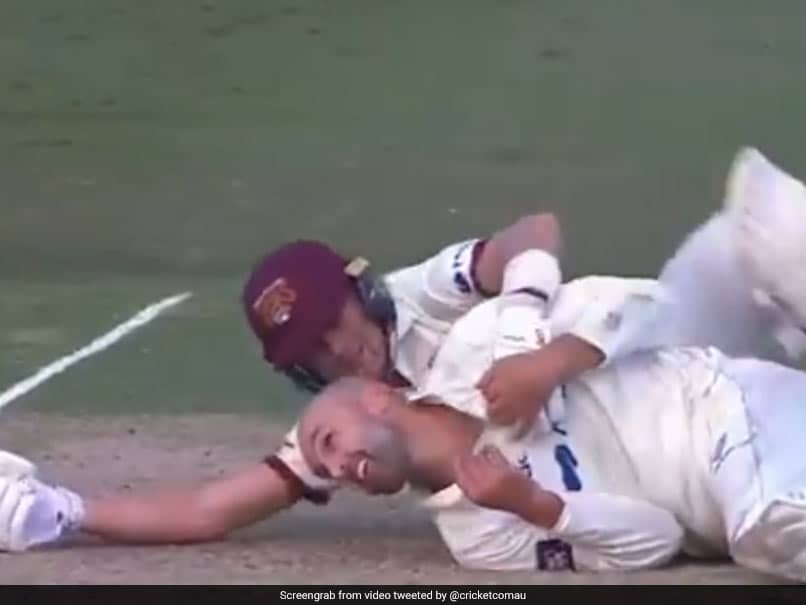 Marnus Labuschagne Nathan Lyon got up close and personal on Day 2 of the Sheffield Shield final.© Cricket Australia/Twitter


Marnus Labuschagne and Nathan Lyon are teammates in the Australian national team but are on opposing sides in the domestic circuit. While Labuschagne is playing for Queensland in the Sheffield Shield final, Nathan Lyon is representing the New South Wales. While both are doing their best to put their teams in a position of strength, they still found time to get up close and personal to each other — quite literally. On Day 2 of the Sheffield Shield final, Labuschagne was at the non-striker’s end when Matt Renshaw hit a Lyon delivery down the ground. In his bid to stop the ball, Lyon collided with Labuschagne, who was scampering back to get his bat grounded. Both fell on the pitch, which was followed by a brief cuddle that gave way to smiles all around, including the comm box.

Lyon possibly needed a hug, having toiled all day but not managed to get the better of Labuschagne. The off-spinner has so far bowled a total of 27 overs in the final, giving away 87 runs with a solitary wicket to his name.

Lyon picked up the wicket of Bryce Street to provide some respite to NSW who have been second best for much of the final so far.

On Day 1, NSW were bowled out for a paltry 143 with Michael Neser taking a five-wicket haul that included a sensational catch from Labuschagne.

In reply, Queensland lost Joe Burns cheaply on Day 1 but that was the extent of NSW’s joy.

Renshaw was the other unbeaten batsman on 29.