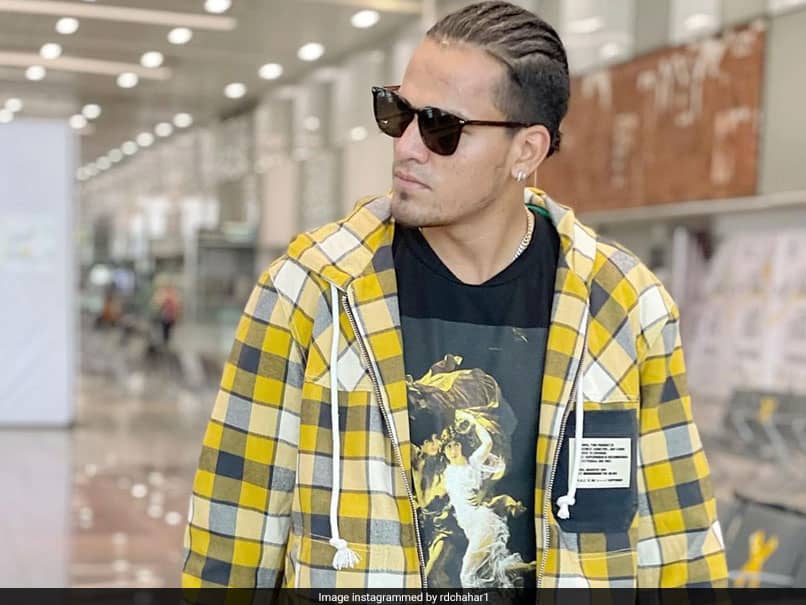 Rahul Chahar has been in great form for Mumbai Indian in IPL 2021.© Instagram


Mumbai Indians spinner Rahul Chahar has been in scintillating form for the defending champions, playing a crucial role in both their wins this season so far. Apart from his bowling, the young leg-spinner is also known for his unique hairstyle and on Monday he posted a picture, introducing his followers to his “hairstylist”. Sharing a picture with his partner Ishani, Rahul Chahar gave her the credit for styling his hair. Using blue heart emoji he wrote: “Meet my Hairstylist”. Rahul and Ishani got engaged in December 2019.

Rahul Chahar, after a quiet start to this year’s IPL against RCB, bowled a match-winning spell against Kolkata Knight Riders, picking up 4/27 as Mumbai Indians came from behind to steal a remarkable 10-run victory in a low-scoring thriller.

In the next game against SunRisers Hyderabad (SRH), Rahul Chahal once again made most of the slow conditions in Chennai and took three wickets in his four-over spell to dry out the runs in the middle overs. Mumbai won the match by 13 runs to register their second consecutive win.

With eight wickets from three outings, the leg-spinner is currently second in the Purple Cap race, only behind RCB’s Harshal Patel, who is leading the race with nine wickets.

With Mumbai Indians scheduled to play their next two matches at the same venue, the teams will be wary of the danger Rahul Chahar can cause in the middle overs not just by drying up runs but also picking crucial wickets.

In the repeat of last year’s summit clash, Mumbai Indians will take on Delhi Capitals in their next fixture on Tuesday.