After turning 3, my proclivity towards bronchitis got the better of me, and, confined me to my sickbed, the only thing that was allowed for me that raised quite a few eyebrows in my house, was the chicken stew. Now, this was primarily because of the chief ingredient – chicken. The fowl, while was a rather easy thing to consume in the form of a cutlet or a roast in a shady cabin or a semi-fancy restaurant, was a strict no-no up until the middle of 1980s, when, for the love of her granddaughter, my grandmother grudgingly allowed my mother to cook chicken in the house. A tiny stove was assigned first – but, realising the time it was taking for my mother in producing a simple stew, my grandmother quickly changed her mind, and thus entered the chicken in the Banerjee household. It was rather interesting to note that porcine delicacies like ham and bacon would be rather easily found inside the fridge, but not so much the chicken. Perhaps the primary reason was the fact that chicken consumption was mostly associated with Muslims and Christians, and as a result, they weren’t cooked by the women in my house for a considerable period of time.

My father describes, with a great deal of relish, the first time he had consumed country chicken in the house – a separate coal fire unoon was bought and prepped to prepare the meat from a couple of desi murga (country cocks) with long limbs and bright red combs, and apart from chopping onions and making a paste of garlic and ginger, his mother (my grandmother) had stayed completely away from the entire scene – a feat that was so rare for the otherwise observant woman that everyone had taken note. The result, after nearly two hours of cooking, was served to my father and his siblings, and my grandmother had not participated. The silent non-participation was duly noted, and chicken wasn’t cooked in the household until a three-year-old with bronchitis was told to consume chicken stew made with broiler chicken every single day. 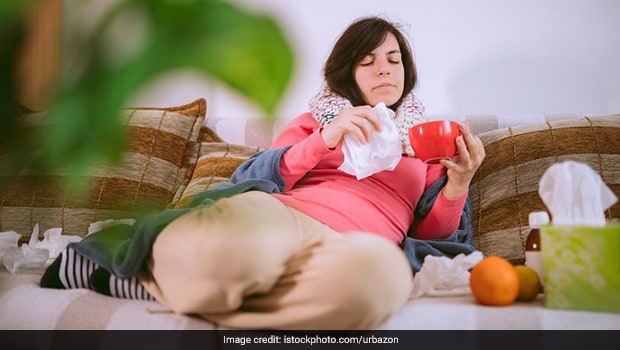 Warm soup can bring relief to the sick.

Now, unlike today, when recipes are a dime a dozen on the internet, a recipe for stew would be roughly outlined by the doctor, and then embellished upon by the cook in question. The puzzlement about the lack of spices as well as the emphasis on broiler chicken was palpable, but the reason behind the latter was probably the availability of poultry-bred chicken during that time as well as the relatively less time it took to prepare it. Armed with a pressure cooker and a rough outline, my mother had prepared the chicken by washing it thoroughly first. Then, rather than marinating it in turmeric and salt, like she would do for most meat or fish dishes, had left it alone. In hindsight, she recollects her initial reticence and fear about not getting the recipe right dissolve in front of the praise my father had heaped on her. As a football enthusiast and a regular clubhouse visitor, he would be a regular consumer of thick slices of quarter-pound bread with a generous serving of chicken stew, and he would also find it in Dalhousie region, where hawkers would serve up a simple chicken stew-bread affair on the sides of the busy neighbourhood. In Dacres Lane, Chitto da’s tea shop would be famous for their chicken stew served with thick slices of toast from locally-sourced bread, while in Hazra, cafes, restaurants would sell the stew as well. As a light, nutritious meal, chicken stew gained mileage in my house soon enough.
In some Mughlai restaurants of Kolkata, the stew would be a rather spicy affair, flavoured primarily with onion and pepper and a good deal of fat to make it more palatable. After ordering the stew at Arsalan, I remember being astounded to see a flattish bowl of brown gravy with a huge piece of mutton and a layer of fat swimming on top placed unceremoniously by the server. A brief inquiry back then had revealed that the stew made at Arsalan was “spiced up slightly” to make it more palatable for the patrons, and I had balefully looked the peppery, maroon-coloured gravy and wondered what had happened to the pale-yellow runny stew I had grown up eating. A close contender to this stew is probably the Keralan “ishtoo”, which, apart from the coconut milk and a few spices and herbs here and there, is a decidedly similar recipe to this one.

The Chicken Stew recipe described today is one which my mother’s doctor-recommended, and it has been a staple in our household ever since it made its first appearance back in 1987. The pressure cooker saves a good deal of time and effort in making this recipe, but it can be done without the pressure cooker as well. 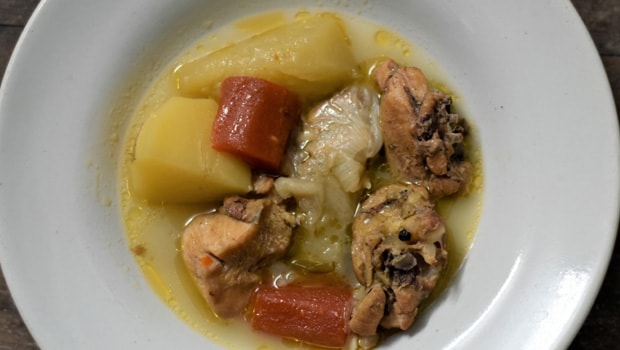 Bash the whole spices a couple of times just to get them slightly bruised. This helps increase the flavours and aroma of the stew. In a pressure cooker or heavy-bottomed pan, put the butter and the whole spices together and put the vessel on fire over simmering heat till the butter foams up.

At this point, coat the bottom and sides of the pan with the butter. Then, add the chicken, and over high heat, let the chicken sear on all sides, about 3-4 minutes, stirring occasionally.

Push the chicken to one side of the vessel and add the vegetables. Stir for a couple of minutes, then mix everything together.

Add 1 litre of hot water to the vessel and then add salt to taste. Cover the lid tightly and pressure cook till soft (about 5 minutes on simmer after attaining full pressure, or 2 whistles as per many cooks), or just cover the vessel and cook till the chicken and vegetables are quite soft. At this point, add the milk, then finish with a final adjustment of salt and pepper.

Do not let the milk boil, because it will curdle otherwise. Serve with toasted bread, preferably buttered, and a small dollop of butter on top of the stew.

About Poorna BanerjeePoorna Banerjee is a food writer, restaurant critic and social media strategist and runs a blog Presented by P for the last ten years where she writes about the food she eats and cooks, the places she visits, and the things she finds of interest. She is deeply interested in culinary anthropology, and food history and loves books, music, travelling, and a glass of wine, in that order.