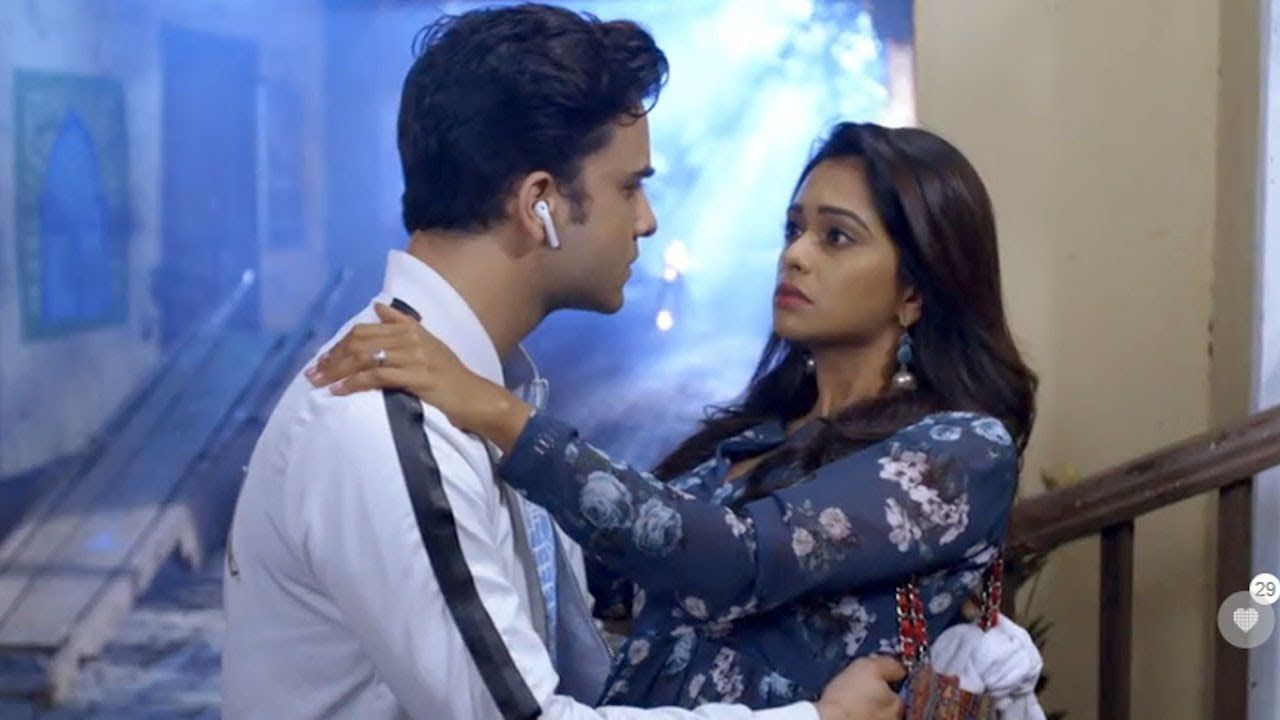 Abhi reaches the living room and sees Pragya and is about to go and say something to her but then remembers his punishment. Abhi thinks, how should I make fuggie forgive me. I didn’t do something bad! I just decided to wake up a little late. Hmm….. Yes, that’s the perfect idea!

Abhi goes to Prachi and whispers something in her ear. Prachi turns to Abhi and says, “sure Papa, I’ll do it.”

Pragya notices this and thinks, what did he ask Prachi to do. I need to find out someway or another because I know it’s definitely something relating to the punishment I gave him. Pragya starts thinking of ways to find out about what Abhi asked Prachi to do.

Vikram comes to the living room and says, “okay so, Pallavi and Pragya ji have bought a bowl full of milk with a ring in it so Prachi beta, Ranbir come you guys will find the ring.”

Prachi and Ranbir come and sit down near the bowl.

Before they start playing the game Shahana asks, “waise, isn’t this ritual usually performed on the night the two people get married?”

“Haa Shahana, you are right but actually everyone was really tired on the night Ranbir and Prachi got married plus Purab wanted to be here as he couldn’t see the marriage but he did want to see all the other rituals and functions that were left. Even if the marriage didn’t happen like marriages usually would. He wasn’t here at the reception because his flight got delayed otherwise he was planning to surprise everyone then,” Pragya explains.

“How do you know all this?” Abhi asks. Pragya is about to answer but remembering the punishment she had given she remains quiet.

“Haa, Pragya puttar, how do you know all this?” Dida questions.

Abhi says, “waah, as soon as your Di came back you completely forgot about your Bhai.”

Purab replies, “you’re right after all my Di is the best.”

“Well, if your all done talking can we start the game and then go and have breakfast!” Riya says.

Everyone nods and Shahana says, “I bet Ranbir will win.”

Prachi glares at Shahana and is about to say something when Aryan says, “no, Prachi will win.”

Fine then if your so confident let’s bet on some actual money,” Shahana replies.

“Okay sure. How much money are we talking about?” Aryan replies.

“Hang on a minute where will the two of you get the money from?” Vikram asks them.

“I have pocket money,” Aryan replies.

“I……. I’ll arrange the money somehow but I won’t to give him any money as I’m going to win this bet,” Shahana replies, sounding a bit too confident.

Everyone nods and Prachi and Ranbir start searching for the ring.

Arhana frown as they both needed to wait a few more minutes to see who would win. Prachi and Ranbir start finding the ring again and this time……….. Prachi finds it.

Shahana frowns and whines, “Prachi couldn’t have you lost on purpose!”

“Why would I? If you being my sister had so little faith in me, I had to prove you wrong didn’t I?” Prachi replies smirking.

Aryan is about to say something when he gets interrupted.

“Di, before we go and have breakfast I need to talk you about something very important,” Riya says. Prachi nods and follows Riya.

Prachi and Riya reach Riya’s room and go and sit on her bed.

Prachi looks at Riya confused and asks, “but why would you want something to not be normal?”

“Okay, I promise I won’t say that whatever your about to tell me is normal,” Prachi replies.

Riya takes deep breath and says, “the day you and jiju got married I had nightmare. First it showed a little girl and man stuck in a lift. Then it showed the same little girl on the edge of a cliff……”

“with a different man holding her on knifepoint and mom and dad, who was the same man from the lift scene were pleading with him to do anything to Kiara Di, the girl,” Prachi interrupts.

“I had the exact same nightmare so there’s no way this is normal. Did you by any chance have a dream with all the happy moments of……”

“Kiara Di, mom and Dad, yes I did!” Riya replies, now certain that both dreams were no coincidence.

“Though at the end a mysterious lady, around the age of 27 said your name,” Riya adds.

“That didn’t happen my dream though, no mysterious lady came at all,” Prachi replies, confused.

“Strange…… very, strange. Di you are going to be with someone for every single minute from now on,” Riya suddenly declares.

“Riya, I don’t need babysitting. I am capable of taking care of myself,” Prachi says.

Prachi sighs and thinks, I wonder what has made Riya so hasty all of a sudden.

Prachi sees Mishti pacing in the corridor. Prachi goes towards Mishti and asks if she’s alright.

“Oh, yes Bhabhi I’m perfectly fine it’s just that I feel this feeling that someone close to me is going to be in danger,” Mishti replies.

Prachi is about to say something when she hears Ranbir voice and turns around to see him standing in front of her.

“Would you mind explaining why your sister’s suddenly become over-protective of you and demanding that you have bodyguards around you 24/7?” Ranbir raises his eyebrows.

Prachi sighs and says, “same dreams.” Ranbir looks at Prachi confused but then is able to figure out what she means.

“But that doesn’t explain why she’s suddenly over-protective of you all of a sudden,”Ranbir replies.

“Well she mentioned that this mysterious lady came and said my name at the end of her last dream,” Prachi says.

“And did anyone come and say Riya’s name in your dream?” Ranbir asks.

Prachi shakes her head in no.

“So she’s worried that your in danger but she doesn’t worry as no harm will come to you if I stay with you 24/7,” Ranbir says.

“Bhai, I think Riya’s right and the two of you should be guarded by bodyguards 24/7,” Mishti says.

“I am perfectly capable of taking care myself!” Ranbir and Prachi say in unison.

“Well the two of you would be so busy in trying to protect the other that one of you would get injured but if a bodyguard was there then someone trained will be able to protect both of you,” Mishti explains. Ranbir and Prachi frown and without saying another word both of them go downstairs, hoping that their parents would refuse to give them bodyguards.

Will Prachi and Riya get to the bottom of their dreams?

Will Pranbir be surrounded by bodyguards from now on?

Do you guys still think that the woman in Riya’s dream was Tanu?

What did you guys think of the update?

The post Will We Unite? – (Part 13 ~ The Investigation Begins) appeared first on Telly Updates.