Chennai: Just a day after Director Shankar announced his maiden collaboration with Bollywood actor Ranveer Singh to remake the Vikram-starrer Anniyan/Aparichit, trouble has mounted for the project. In a strongly worded statement, Anniyan’s Producer V Ravichandran has stated that the film’s story rights belong to him and that the records are available for the same. He urged Shankar to stop work on the project with immediate effect, saying that he is also sending a legal notice to Shankar.

“I am the Producer of the said movie Anniyan. The entire story rights was purchased by me from the writer Sujatha (alias late rangarajan) for which full payment was done by me to him. As such, any such adoption or remaking or copying the main plot of the said movie, without my permission, is totally illegal” read the letter from Ravichandran.

In the letter, Anniyan’s Producer also delves into his past with Shankar and alleges that he had given Shankr the opportunity to direct Anniya despite Shankar’s earlier film ‘Boys’ not having a not so successful run. Ravichandran adds that, Shankar regained lost ground only because of his support. He alleges that Shankar has forgotten the same and tried to reap the accolades of his successful film Anniyan via a Hindi adaptation. 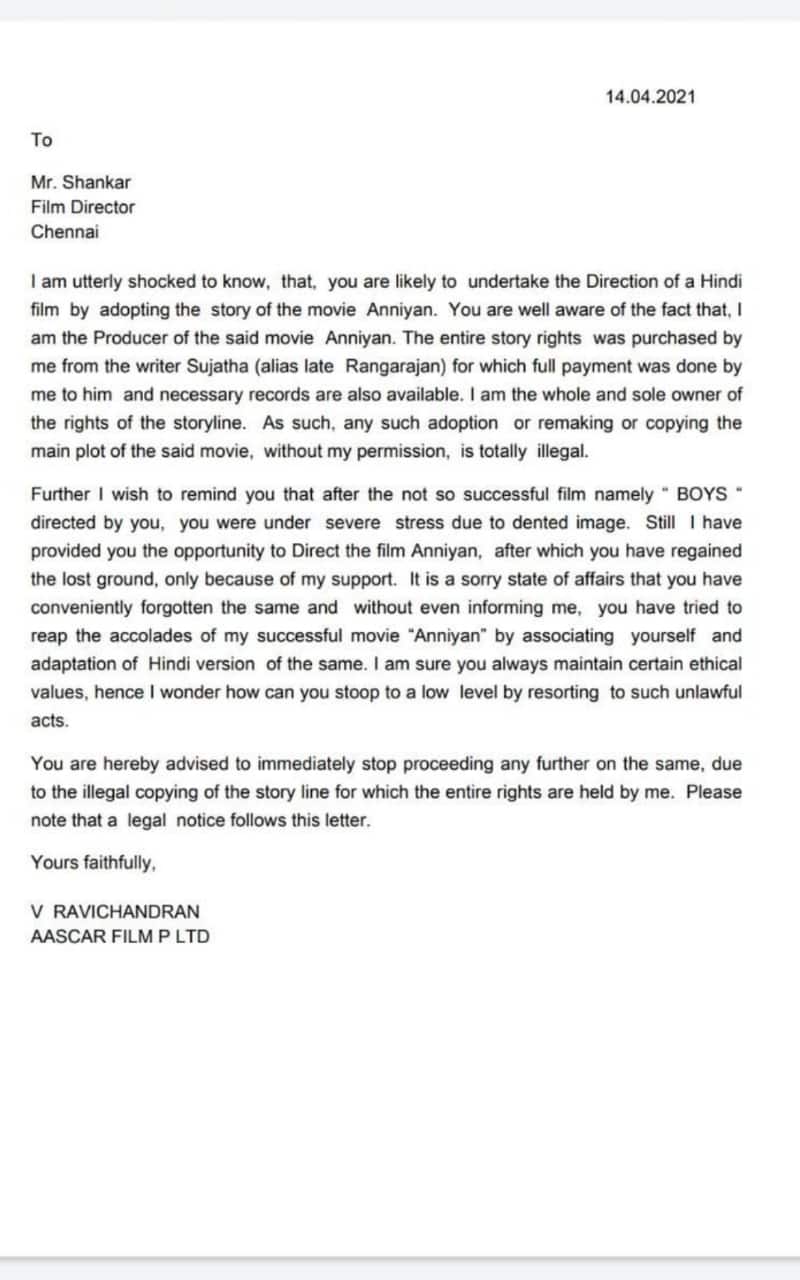 On the occasion of Tamil New year on Wednesday, Shankar had taken to social media and made the grand announcement of his collaboration with Ranveer Singh. “In this moment, no one will be happier than me, bringing back the larger than life cinematic expeirnvce with @ranveerOfficial in the official adaptation of cult blockbuster Anniyan” Shankar had tweeted. He added that Ranveer was a maverick and charismatic showman that no one else could play. It was also stated that this project would big around mid-2022.

Anniyan is a 2005 Action-thriller in Tamil, starring Vikram, Sadha, Prakash Raj and Vivek. The plot revolves around Ambi, a socially-conscious and straight-forward lawyer and his woes with corruption and lack of empathy among the public. As he aims to right the wrongs that he witnesses around him, his multiple personality disorder takes centerstage and spawns a model named Remo and a murderous vigilante Anniyan, who together brings twists and turns In Ambi’s life.