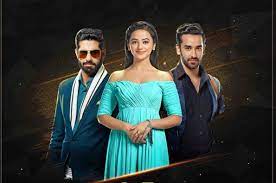 Heyy guys, thanks for all the support from the previous episode! I’m glad ya’ll are liking my FF. Please keep commenting and supporting in the comments section.

So this time it’s finally tackling Vyom, aaj pakka usko apni punishment milegi. And you can add all the other punishments you want, you’re free to

Vyom is seated opposite Angre with a table in between them. There was a small box that was kept in the middle of the table. A few men surrounded them to protect each one of them both.

Vyom: Not bad huh Angre! You are selling the secrets of VR empire to me today! (laughing) Where’s your loyalty?

Vyom: Yea right you can say that to satisfy yourself! Anyway hard disk (pointing to the box) is inside?

Angre: Hmm it is, it has all the secrets of the empire and business. (guilt) Now do your part that you promised in the deal!

Vyom: Of course let me ….from now on my son will not be in your daughter’s class and in fact will have nothing to do with your daughter. We are leaving for Toronto tonight so never ever!

Angre: (smirking) Such a coward you are!

Vyom: No one asked you Angry Angre! If you don’t remember than I can gladly remind you of the heinous acts I did on your pretty Bhabhi. Keeping your family away from her, kidnapping her and also attacking her leading her to fall in to coma. Attacking Vansh’s children (serious) I’ve done all this get it! I’m not a coward! I’m leaving for the airport, Good bye!

Vyom got up and headed for the door when he heard Angre laughing. He turned behind to see him laughing and he went to him with a “Are you mad” look. Angre signalled him to wait and his whistled. Angre’s bodyguards came in front and stood in line with Angre. One by one each one started removing their disguise, and their costumes. Aryan, Kabir, Vansh and Angre stood there in front of Vyom who was stunned while they smirked.

Kabir: Angre plan a meeting with him saying that you have the secrets and all that he wants. We will be there with you disguised as planned bodyguards. We will record confession and confront him then and there. Nothing illegal as well so we’ll be out of the law.

Aryan: It seems a good plan

Aryan: For the first time you did something thoughtfully (mocking)

Angre: So fine I’ll go with a fake hard disk and pretend while you all will be there as disguised body guards.

Vyom: (laughing) So Angry Angre you are loyal! A plan huh?

Vyom: Really? Nahh not so soon!

Vyom attacked Aryan by punching him while the other three backed him off and fought with him, overpowering him. They punched and kicked him hard, removing all their pain and hatred towards him on him. Vansh grabbed him from his collar and dragged him on the floor while he laughed like a maniac. He started punching Vyom hard till he bled.

Aryan: (holding Vansh) Enough Vansh, it’s my turn now! Vyom you harmed my sister and by that you formed an extra level of enmity with the Raichands! You bastard! (punching and kicking him)

Kabir: (joining) My sister suffered because of you!! Her kids are still suffering! (anger)

Angre: (joining) You harmed Bhabhi, you made my daughter a prey!! (hitting)

Vansh: Enough! (shouting) He deserves torture! He’ll know how it is to suffer when he’ll feel electrocuted and when he’ll get a few bullets shot in his brain! (kneeling near him and whispering) You snatched my life, love and existence for 18 years and now you’ll get the pain of 18 years in these days. Pray to God that you die sooner otherwise you’ll a more painful and merciless death! Angre make sure he gets a good treatment, start with the icy torture then you know what to do! (he nodded)

Vansh: What about it? Goes in the bin!

Vansh: When there’ll be no existing person called Vyom Raigir then why this confession? (staring at Vyom)

Vyom was dragged by the four outside where Vansh’s men who were waiting outside took him for another round of torture. They all smirked at his pain and condition, promising themselves to give him worse. They made sure to clear up everything and they headed for VR mansion.

They reached and told everyone to celebrate the riddance of Vyom Raigir, his chapter closed forever in their lives.

Rivan: finally our criminal was punished, we got justice! (smiling)

Riva: But dad why didn’t you take me along? (annoyed)

Aryan: Riva you weren’t meant to see such violence!

Riva: But I wanted to punish him as well! (pouting)

Kabir: It’s fine you can order the punishments you want and we’ll safely make sure that they reach to him.

Dadi: All’s that well, ends well! (smiling) Now no more danger lurking over our family, on Riddhima, on Riva and Rivan, on Anisha. But now what?

Please let me know how you found it in the comments section.

I will be showing a Gujarati wedding, it’s similar to the normal maybe just a little different. Hope you don’t mind.

Also another question, I’m planning something for the episodes coming so I wanted to take your opinion
Please choose between Kenya and Singapore and comment in the comments sections. Majority will win.