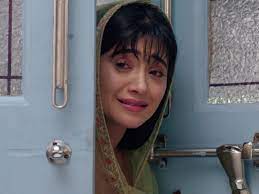 the chapter starts with everyone eating lunch enjoying it , while naira was lost in her thoughts

kartik tomorrow is akshu’s birthday you will come na  ?it’s fine for me if you even come as a dream but please come . tomorrow our akshu will turn 2 years kartik its so good na but kartik you know without you  i won’t be able to enjoy this moment fully if you were alos there ..leave this for akshu only kartik somehow i made kairav understood that you are not with us now but akshu what about her kartik please come …aur haan now she won’t be your kabab mein haddi as you call it na but life is so unpredictable naa . her thoughts were broken by swarna 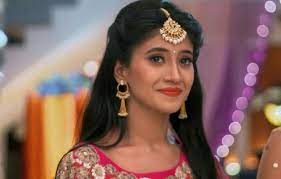 “naira where are you lost ?”,asked swarna

“no maa nothing  “,said naira with a smile

“ohh so you will lie to me now ?”,said swarna

“no maa it was just i was thinking about akshu nothing else “,said naira

“yes maa i am absolutely fine”,said naira with a smile .

“yes surekha she is a financial manager right?”,asked swarna

“yes di sadly she got divorced 1 month back “,said surekha with a sad smile

“Sad that is “,said Swarna while Naira listening to the talks thought ;

Hmm it’s true life is unpredictable  what i am yearning for i won’t get it and what rhea wanted she did not got it as of now i think everyone is sad in the world  no one is happy in this world . naira’s trance was broken by kairav

“mumma tomorrow is akshu’s birthday will mihir uncle also come? “,said kairav while naira had no response . all the goenka’s understood the situation and stayed silent but to their suprise

“yes baby they will come he is your friend na”,said naira remembering what kartik had said to her that kairav considers mihir as a friend . while all the goenka’s had  a smile on their faces but manish and swarna were tensed thinking about the turmoil naira is in . while kairav was excitedly jumping all around the house containing the excitement for tomorrow .

it was the night before akhu’s birthday . the one whose excitement was at peak it was kairav . he was jumping here and there telling people that tomorrow akhu will turn 2 years old . while naira was happy looking the excitement kairav had , she also remembered the day aksu was born and kartik fainting in the operation theatre . the trio : naira , kairav and akshu were in the room playing

“mumma  see now akshu will call me bhaiya and it will be so nice “,said kairav

“yes baby it will be nice i bet you will be the best brother “,said naira

“and you are the best mother “,said kairav hugging naira

“thank you baby”,said naira hugging him back and giving him a kiss on his cheeks 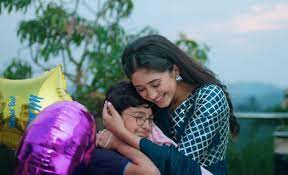 while akshu started crying while kairav started to tell her to stop crying lovingly while naira adorned the duo but akshu being akshu was not stopping crying . naira placed her on the bed and kairav was just thinking what is naira gonna do and to his suprise naira sang a lori to which kairav also laughed on what naira sang

while kairav was laughing , akshu also stopped crying while naira was teary eyes as this was the lori kartik sang to akshu whenever she cried .

“mumma from where did you learn this lori?”,asked kairav

“you papa taught me kairav you know when akshu was in my stomach na then kartik used to sing this and she used to kick at that moment even during delivery he sang it ,said naira with teary eyes

while kairav did not respond but immediately hugged naira

“what happened baby you are missing papa? “,asked naira

“yes mumma why did he left us i miss him mumma “,said kairav crying

“no baby dont cry like this accha come with me “,said naira wiping kairav’s tears.

“you know kairav when ever you miss papa na come here  even i come here . you see that star its so beautiful na if you miss your papa then come here and talk to that star . see kairav god only call the people to them who are good na and kartik was the best toh god “,said naira looking up at the sky while kairav just hugged naira and said hi papa to which naira smiled . the duo was adorned by all the goenka’s . naira and kairav were backfacing them . they all had tears in her eyes . the day ended for the family missing kartik and getting ready to celebrate kartik’s birthday .

the next day it was akshu’s birthday all of them wished her , well she could’t say thank you but she huckled when she recieved gifts from everyone. while mihir kapoor decided to join the celebration in the evening because of work .while naira was missing kartik she was backfacing the person who was standing at the door with a bouquet in her hands . she came closer to naira and tapped her shoulders while naira looked at her but did not recognised her.

“hey i am sorry but i did not recognise you “,said naira

“ohh no problem  i will introduce myself i am rhea “,said the person(yes guys it’s rhea)

“ohh rhea you are into finance manager  as far as i know chachi’s niece isnt it?”,asked naira

“yaa and you are naira if i am not wrong “,said rhea

“yaa welcome to our house “,said naira giving her a hug

“thanks “,said rhea moving towards akshu and wishing her a happy birthday while from behind surekha and everyone comes and greets each other . while they chit chat a  lot but suddenly rhea asks naira a question which brings her to tears

“naira where is kartik he is your husband na and  you will have to tell me about your love story also bua told me that you guys are like made for each other”,said rhea while all the goenka’s had a sad face while for naira it was like tears can broom any minute but she holded them up.

“voh actually rhea kartik..umm he is dead”,said naira looking downwards holding back her tears while rhea got shocked and immediately ran and hugged naira

“i am so sorry “,said rhea hugging her

“it’s ok rhea”,said naira hugging her back . while all the goenka’s smiled at their bonding which they developed only in minutes . naira ecused herself and ran upstairs and opened the diary and made one more line to it with tears in her eyes . while swarna and rhea were talking about stuff in their room .

“i am so sorry aunty i couldn’t even imagine what your family went through especially naira “,said rhea

“aunty if you don’t mind can i ask you something?”,asked rhea

“actually aunty i wanted to know kartik nd naira’s love story i have heard a lot of praises for them i would have asked naira but i dont want to make her sad “,said rhea

“rhea there love story was very extaordinary they had many love story in one love story they had fights but they always resolved it . they were actually kids fighting but ya their love was the purest . naira doesn’t show but i know she is very sad and broken from inside she is only living for her kids   rhea she is broken she is still not able to grasp the fact that kartik has left us …especially from yesterday’s incident…” ,cried swarna but she stopped as she realised what is she gonna speak next .

“second marriage ? and who is mihir ?”,asked rhea

“whatt how could you guys do this see no offence but i can understand naira’s pain she is not ready to move on aunty ofocurse no one will want their love of life to just go even i am divorced aunty but the thought of second marriage its just too much . please don’t force her aunty its  not good “,said rhea while swarna told her that they would not force her and they love naira just like their own daughter.

In the evening everyone was happy but naira was just having a fak smile of course she was missing kartik like hell today . they cutted the cake while even mihir joined them and kairav and mihir played football for some time while naira being saddened just went to the room with akshu to make her sleep .

hey peeps!! that was a long one wasn’t it !! will meet you in next chapter !! do vote and comment !! hoping for some comments

The post LOVE YOU TO ETERNITY CHAPTER 5 appeared first on Telly Updates.