NEW DELHI: Bollywood actress Kangana Ranaut has once again hit out at her contemporaries, indirectly alleging that she did not receive any support or praise from female colleagues in the film industry. The four-time national award-winning actress disclosed the reason behind not receiving any support from them on social media.

“There is not a single actress in this industry who I have not supported or praised here is the proof, but non of them ever showed any support or praise for me, have you ever thought why? Why they gang up on me? Why this conspiracy to look through me and my work? Think hard,” Kangana Ranaut tweeted.

In a separate tweet, the ‘Queen’ star revealed that while the same Bollywood actresses used to invite and even pamper her at their film special screenings, they brazenly ignored her calls when she invited them for her film previews. “As you can see how comfortably I go for their movie previews when they invite by calling and messaging me directly, they send flowers and pamper me to sky and when I call them for my previews they don’t even take my calls now I bajao them every day cause that`s what they deserve,” she wrote. 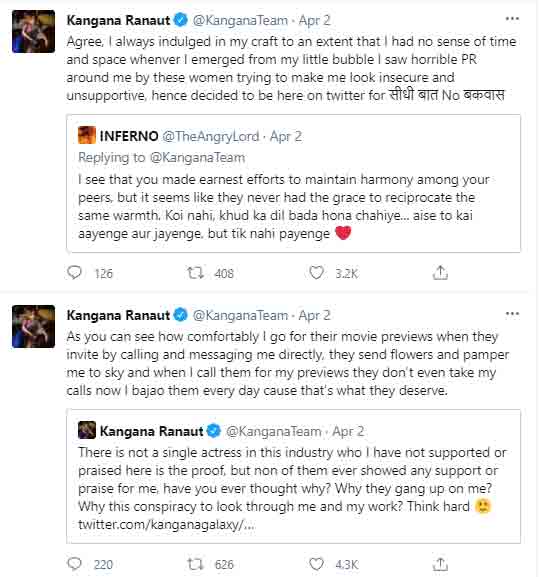 Kangana’s tweet came in reaction to a fan page that shared a video where Kangana is appreciating other Bollywood actresses.

To this, the actress replied: “Agree, I always indulged in my craft to an extent that I had no sense of time and space whenver I emerged from my little bubble I saw horrible PR around me by these women trying to make me look insecure and unsupportive, hence decided to be here on twitter for seedhi baat no bakwas (straight talk and no rubbish).”