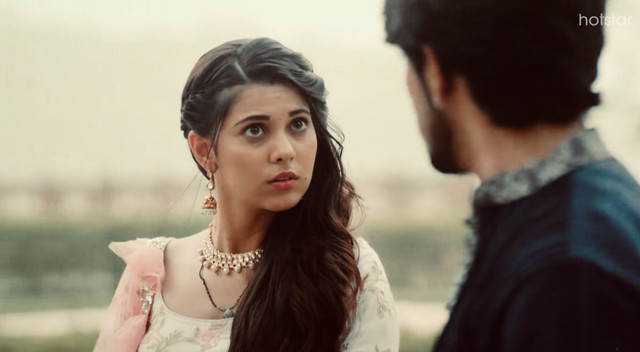 I am submitting here my first ever written OS. It is based on the beautiful pair ShiVi from ‘Pandya Store’. Please read and let me know your feedback.

Raavi stood still. She was unable to take further steps on hearing Rishita’s accusations. She can feel her tears running down her cheeks. She turned and looked at Dev who looked down sadly. She cannot believe this. Dev doesn’t love her, but still he knows her very well that whatever his wife blabbering now is not true, but still he didn’t stop her. She felt like an idiot for thinking to be in love with this spineless mam for all these years.

“Don’t you have any shame? Why are you still looking at my Dev?”, Rishita complained. Raavi could not tolerate anymore and was just about to run away from there when she heard his voice.

“What’s going on here?”, Shiva came through the entrance. He must have followed her. She wiped her tears soon and wondered how much he had heard.

“And Rishita bhabi, it seems you were asking something to my dear wife. Why? Don’t you have that yourself or forgot to pack in hurry?”, Shiva asked coldly. Rishita winced at this and looked back at Dev, who just shook his head.

Raavi could not help but chuckle at Shiva’s sarcasm. He turned hearing her and smiled. He talked to Rishita while still looking at Raavi, “Anyway, me and Raavi are going to market now. We will buy it for you and come. Just tell me what you need” He completed his sentence with such fury that Rishita took a step back.

Raavi is on clouds nine now. She was surprised when Shiva asked her to go to the market with him before. But then again he spoiled her mood by mocking her up. Now, even though she knows very well that Shiva is telling this again just to irritate Rishita, she could not help but feel happy about the outing idea.

This is what she always loves about him. He will fight with her to the core, but nobody else could say anything to her as long as he stand with her and he always stands with her.

She is very happy and don’t want all these Dev and Rishita nonsense now. Hence, when Shiva opened his mouth ready to taunt Rishita, she blurted out ‘Chasme’. All three were looking at her confused.

Raavi quickly hooked her hands with Shiva’s hands and said “She needs Chasme, because she could not see properly that she is not in their bedroom, but open courtyard and my husband is way more hotter than her dear husband”

To say all three got shocked at her words is an understatement. Boring jodi was standing there with their mouths wide open and Shiva was still trying to process her words. But Raavi don’t have time. So, she just dragged her cutely confused husband and started running from there. When she turned back and saw Shiva’s amused smile, she is sure that love is still there in her karma.

How was it? I hope you like it. Thanks in advance and sorry if this was not entertaining enough.